This is a very simplistic article :) if you are looking for a deep dive in microservices, see my state-of-the-art microservices full archeticture here: http://dev.basharallabadi.com/2019/03/part-1-spring-state-of-art.html

What are micro services?

It's an architectural model for web services that basically requires each service** to be completely independent and loosely coupled from other consumer services, or services that it depends on. and it's not a new idea but it's catching pace in today large scale web applications.


1- Easy to scale services: if you have a single application and all the services share the same code base and war (package) then if you receive high demand on one of the services, you will need to deploy more instances of the whole application but if each service was independent and has it's own code base and package then it will be easier to scale that specific service

2- independent services: each service is managed and owned independently, it has its own lifecycle and upgrades, it can be written in any technology stack and it's self contained an encapsulated.

3- faster development cycles: each service is managed and owned independently from top to bottom, that means each team and each service based on its complexity are only limited by themselves which should minimize any noise that can slow them down in getting releases out.


Note:
you may wonder how can you do a complete transaction without the billing service talk with the order service for example.. the answer is that you will have your business transaction application above all these services and it handles communicating with each service and handles the orchestration among them.


What are the implications and technology stack when using micro-services?


1- The need for light weight hosts (application servers) due to the fact that each service will have its own application context, spring boot provides embedded web containers that fulfills this need.

2- usually you need to keep the documentation up to date of your service because other teams depend on it.

3- A lot of people now use containerized deployment using Docker.

4- for complex systems, a service registration server is needed to allow for run time changes without affecting consumers.(Netflix open source library for this is called Eurka)

since I'm using windows 10 home edition, I had to install Docker toolbox, from here: https://www.docker.com/products/docker-toolbox

choose where to install it, and continue, it will install Oracle Virtual box and Git if not already installed, we will run docker in the 4th step.

first part states the build tools dependencies on spring boot and gradle docker
2nd part for the plugins
3rd part for the main class
4th part for the artifact meta data,
and the docker task part mentions docker file that will be used by docker plugin and prepares for the docker image creation by copying our jar to the docker staging directory in the build output folder of gradle

the rest is just for maven dependencies.
c- DockerFile


open git-bash as administrator and navigate to Docker ToolBox dir, and run the start.sh there, it may take some time in the first time : 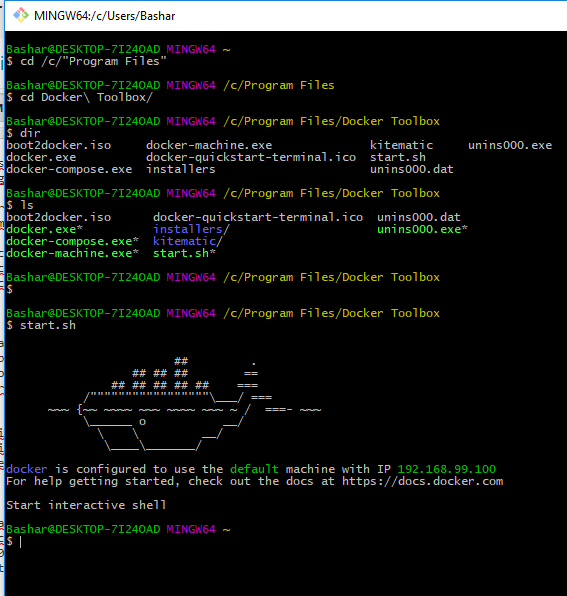 now with our docker server running we are ready to build our jar and put it in an image and run it.

1- first test that your application runs without docker

visit localhost:8080/cats/say
and you should get a "mewo"

2- now run this gradle command to build your container:


and that task reads the docker file, downloads the image from Docker hub, mounts /tmp for our application (see the reference link on why they did that, it's needed if spring boot app to write files)
and then docker copied our jar from target/<jar-name> to app.jar, set env variable JAVA_OPTS to empty, and set the entry point of this image to run our app.jar.

note: the java.security.egd is explained in the reference link, it's optional and irrelevant to docker.


now if you run

this is cool, that means our image is ready to be used

3- containerize the image and run it :

NOTE: that you can't have two images containers running on the same port, so you have to stop it first


to access the app in this container, and because we are on windows, you have to go through the virtual box first that is hosting the Docker container engine, the IP address is in the first picture above

Note:
there are alot of examples like this on the web, the problem that mainly faced me was that I'm using a windows machine, and I couldn't use the docker plugin without docker file the way this tutorial is doing: https://medium.com/@hudsonmendes/docker-spring-boot-microservice-with-gradle-9785087e7992
however, it all leads to the same results, so just be patient if things don't work, take a step back and you maybe have to do a work around until you deeply understand how things glue together.


now with that is done, let's emphasize the value of what we did to the Micro-services approach, by:

a- create repository on docker hub if we don't have

b- login through the shell

it should say login succeeded


so that we can identify other versions in the future:


notice the new image now in our images list.

d- push the image to our hub repo:


1- remove all images from our docker engine

2- when we are done with that, we will pull our image from docker hub:

cool our image is back again, from the hub not locally let's try and run it

anyone basically with Docker can now run our microservice without jdk, spring, or anything, it's crazy :)

- note the ports are different than the previous time
-image link: https://hub.docker.com/r/basharlabadi/microservice-101/


Scaling up our service with Docker

let's now run another instance of this service to handle the demand on our cats meows:

using the same command but different port we can roll out another instance, while the other is up and running normally:

and to see the instance that we have running :

as you can see the two instances are there and there is a third instance that we started before and I forgot to stop.

By bashar September 24, 2014
In this post I'll explain the required work to create a rest API utilizing both spring and hibernate version 4, and the configuration will be using java configuration classes not XML. I'll use gradle to build and for dependency management, it's way easier than maven and keeps you focused on the application, if you are not familiar with gradle and interested in it see my previous post about it. The first part which is dependency management is covered in gradle post mentioned above. I'll skip to explain each tier of the project and its configurations: As you can see we have 4 tiers: 1) DAO tier / data tier In this tier we configure the datasource and hibernate, I used HSQL in memory db it can be easily substituted with other db engine providing the right dependencies The DaoConfig defines the data source, transaction manager, session factory and  hibernate properties The most important part is the annotations : 1)  @Configuration  : to tell spring th
1 comment
Read more

By bashar November 04, 2018
In the previous part we finished the dashboard read functionality, now we want to add the skeleton for other pages: - Login   In this page the user will be able to login to their account and the dashboard won't show unless the user is logged in. - Profile In this page the user will be able to update their daily nutrition goals that they can track in the dashboard. to be able to have multiple 'pages' in react and navigate from one to one, we need something that can switch the rendered content based on what we want, we can do that with if statements in the App components and store some location state, but why invent the wheel. React Router every major single page app web framework has the routing concept and functionality to interact with the usual browser urls and switch the content based what user should see. for example on the profile page I want the url path to be /profile, and for login to be /login and so on. in more advanced cases you want the users
Post a Comment
Read more
My Github