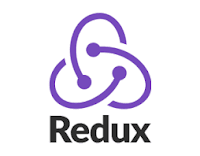 In the first part we covered how to create components and
how to interact with a mock api to get data for our application.

all of that can be enough to build a react app but it won't scale well
for the following reasons:
1- state will be all over the place  in different container components which means we have to add more layers of components to share common parts of states.
2- the propagation of events can be hard to deal with when the components tree gets deeper and other components (siblings and their children) will probably need to be notified of state changes.

so there is a library called redux, and redux-react.

this library in simple terms facilitates dispatching application wide events to specific handlers (reducers) that modify the state based on the actions they receive, it then store the whole state after those handlers change it and pass the new state to react framework to rerender our components.
In short: it's an event publish/subscriber tailored to manage a state object.

it worth mentioning that redux itself can be used to manage any state, not only react (state is just a JS object at the end of the day) but redux-react adds helper functions and saves you from writing some boilerplate code that we will see soon. 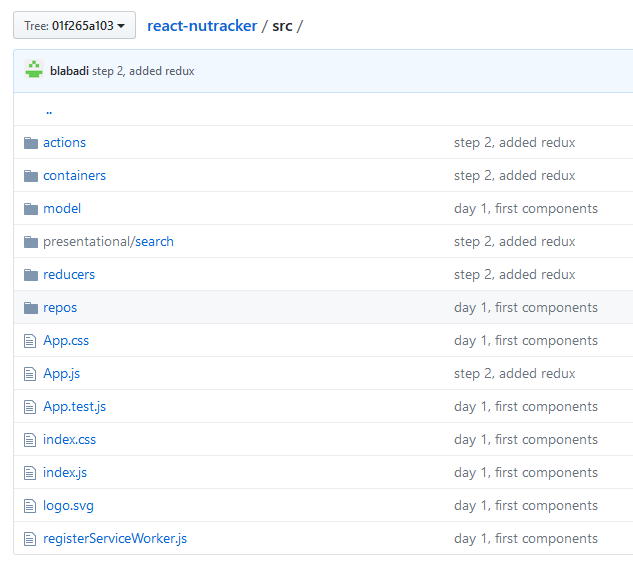 Directories added (to organize but not needed):
- actions
- reducers
Renamed:
components => presentational (not related nor needed to redux)

To think the redux way, we have to look at what our component raise for events
currently we have searchBox on term change, this can be translated to a redux 'action' called SEARCH_FOOD.
Actions have to be objects (by default) and to distinguish each action, we give it a type property which is unique string across the app, they also hold any other properties as needed.
So we want our searchBox to send (dispatch in redux terms) a SEARCH_FOOD action to trigger a call to the mock api and fetch foods that match the user query.

Note that our presentation component (SearchBox) won't change in anyway because it was designed not to need so (see part 1 for details).
Only our container components will change
from:
- managing state locally
- being responsible to fetch the data by calling the external api (handle events)
to:
dispatch actions and receive new state

for the first action it will look like this:

the action is just an object, the function that creates that object is called an action creator.
in our case, it takes term as an argument and returns a simple object .
the SearchBox dispatches that action by using the method: dispatch passed to it from redux store
A lot has changed in this component it no longer has any of the react related code, and the reason is:
that it is now created for us by redux using the connect() helper method from redux-react library.

The moment you start using redux our container components become unnecessary to be created manually (repetitive boilerplate code) as they will just have one variant in the code , which is to tell redux what to dispatch on each event (mapDispatchToProps), and how to read the state and pass it to child presentation components (mapStateToProps).

The next question if you look at the code above is where did state.searchFoodResults was created ?
the answer is: in the reducer.

A Reducer is a function that receives (state & action) and returns a new state calculated from the action.

for our case here this is our reducer:

it took the state and if the action is SEARCH_FOOD we filled the state with the mock data.
and returned the new state.

few notes:
- Reducers has to be pure functions (no api calls, no database calls nothing that is not a pure js objects manipulation), in this example I did call foodRepo in the reducer but that's just because it's mock data call, not actual network call, but we will change this next part.
- combineReducers is a method from redux that you pass it all the reducers you have and it will build the state tree out of these. (it's good practice to split reducers based on parts of the state each handles, and not have one gigantic function). if we say want to store user information in the state, we would do so by having a reducer like this :
const user = (state = {}, action) => { ... }
and our state will look like this:

So by now our app hasn't changed functionality wise, but internally it changed a lot, and this is a needed foundation to scale it for a bigger state and more interactions across components.

In the next part I'll explain how we can get rid of the mock data and do an actual async ajax call to an api that will return foods and what will need to change to handle the asynchronous  call.

By bashar November 04, 2018
In the previous part we finished the dashboard read functionality, now we want to add the skeleton for other pages: - Login   In this page the user will be able to login to their account and the dashboard won't show unless the user is logged in. - Profile In this page the user will be able to update their daily nutrition goals that they can track in the dashboard. to be able to have multiple 'pages' in react and navigate from one to one, we need something that can switch the rendered content based on what we want, we can do that with if statements in the App components and store some location state, but why invent the wheel. React Router every major single page app web framework has the routing concept and functionality to interact with the usual browser urls and switch the content based what user should see. for example on the profile page I want the url path to be /profile, and for login to be /login and so on. in more advanced cases you want the users
Post a Comment
Read more

By bashar August 06, 2017
This is a very simplistic article :) if you are looking for a deep dive in microservices, see my state-of-the-art microservices full archeticture here: http://dev.basharallabadi.com/2019/03/part-1-spring-state-of-art.html   What are micro services? It's an architectural model for web services that basically requires each service** to be completely independent and loosely coupled from other consumer services, or services that it depends on. and it's not a new idea but it's catching pace in today large scale web applications. ** (by service we mean a component that controls and implements the business logic in a self contained manner, like orders service, products catalog service, accounts management service, all of these have their domain and can be clearly separated)   Why micro services emerged ? 1- Easy to scale services: if you have a single application and all the services share the same code base and war (package) then if you receive high demand on one
Post a Comment
Read more
My Github